This project is due to begin construction on September 21. The Stormwater Team collected public opinion at various meetings including at GVGC Meetings and made some project changes. You may contact them for the specifics. 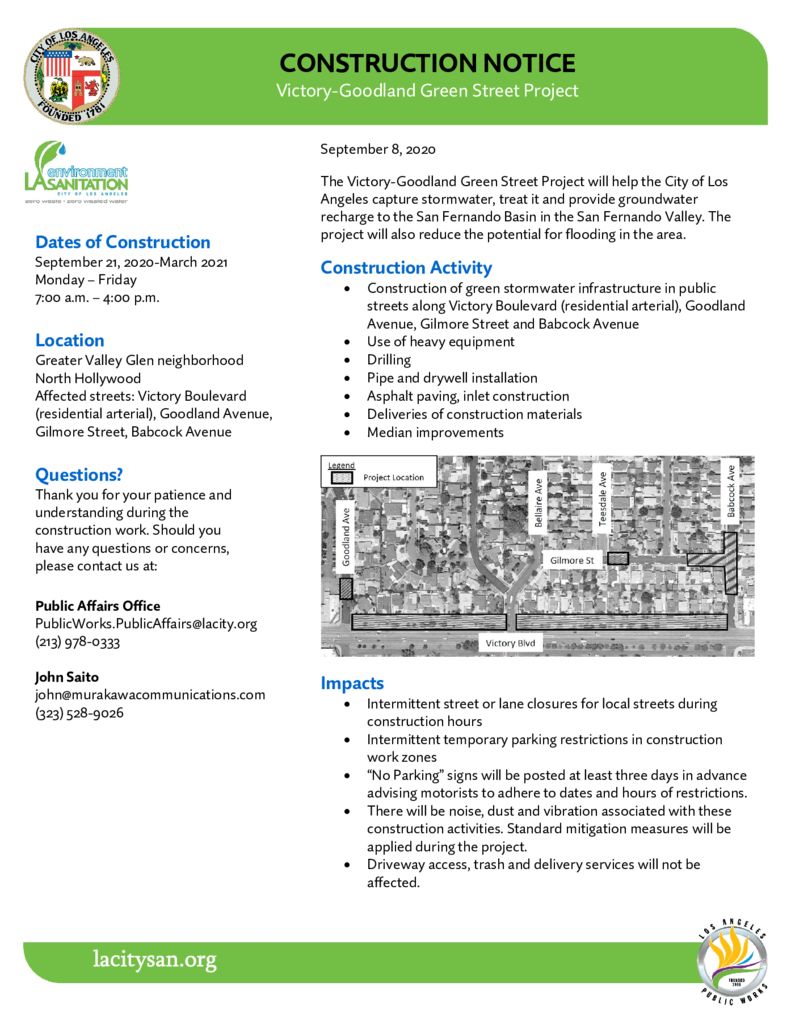 A public meeting was help by zoom on June 4, 2020 to share the plans and hear public comment. There was a great turnout with a lot of feedback. If you missed the meeting, you can replay it here:

And you can submit public comment by completing the survey before June 19.

After the meeting, please complete this survey

The ongoing issue of flooding on Victory near Goodland, Bellaire and Babcock is planned to be addressed before the next rainy season.

When it rains, water to the north drains to Victory, where an undersized storm drain running under the north median is overwhelmed, resulting in flooding on Victory.

Council District 2 recommended this issue to the Department of Sanitation Stormwater and Watershed Management Group as an area ripe for their projects which are aimed at capturing more stormwater, which as you may recall, mostly all gets routed out to sea. The Stormwater and Watershed Management Group has funding to complete projects that will capture more stormwater and route it to underground aquifers. These projects would likely also provide the benefit of reducing flooding.

The project involves five locations to capture water and send it into underground dry wells. One location would be on Goodland south of the Cinemark driveway. Water would be collected through curb cuts on both sides of Goodland and lead to a dry well under the street. The exact placement is still being determined as there are utility boxes in this area that have to be evaluated for placement of the drains.

Another location would be on the median north of Victory and west of Bellaire. Water moves from Goodland along Victory to the east passing by this spot where curb cuts on both sides of the median can collect the water. The water would then go to a primary dry well, which when it is full enough overflows to a secondary dry well. The dry wells would be underground and approximately 6′ in diameter with structural support on the sides and an open bottom with the goal of allowing the water to be absorbed into the underground water table.

On the median itself what would be visible would be a water garden, which includes the curb cuts, drought tolerant landscaping and river rocks as shown in the above rendering.

Another location would be on the median north of Victory and west of Babcock. It would have the same configuration as the other one one the median. Both would also connect the primary dry well to the storm drain running under the median.

Project leaders will be holding a virtual public meeting June 4 to further share initial project plans and to hear public comments and concerns. We will publicize news of this meeting when it is available. In the meantime, you can contact publicworks.publicaffairs@lacity.org with questions or concerns.

The Victory-Goodland Green Street Project has an approximate total area of 108 acres and has the potential to capture up to 108 acre-feet of stormwater runoff per year. It is located in Council District 2 (CD2) in the Valley Glen neighborhood and the drainage area is bounded by Vanowen St to the north, Whitsett Ave to the east, Victory Blvd to the south, and Coldwater Canyon Ave to the west.

The project is a joint partnership between the City of Los Angeles Sanitation (LASAN) and Los Angeles Department of Water and Power (LADWP). This project is a Green Stormwater Infrastructure (GSI) project that plans to capture and infiltrate stormwater runoff using drywells and pre-treatment systems (i.e. bioretention planters). The project will recharge groundwater in the San Fernando Valley Basin, capture pollutants prior to discharging to the downstream Los Angeles River, and may reduce runoff flow rates and volumes during certain storm events. The stormwater infiltration systems assist the City to meet established total maximum daily loads (TMDLs) for the Los Angeles River by removing pollutants such as trash, bacteria, metals, and nutrients from stormwater runoff. 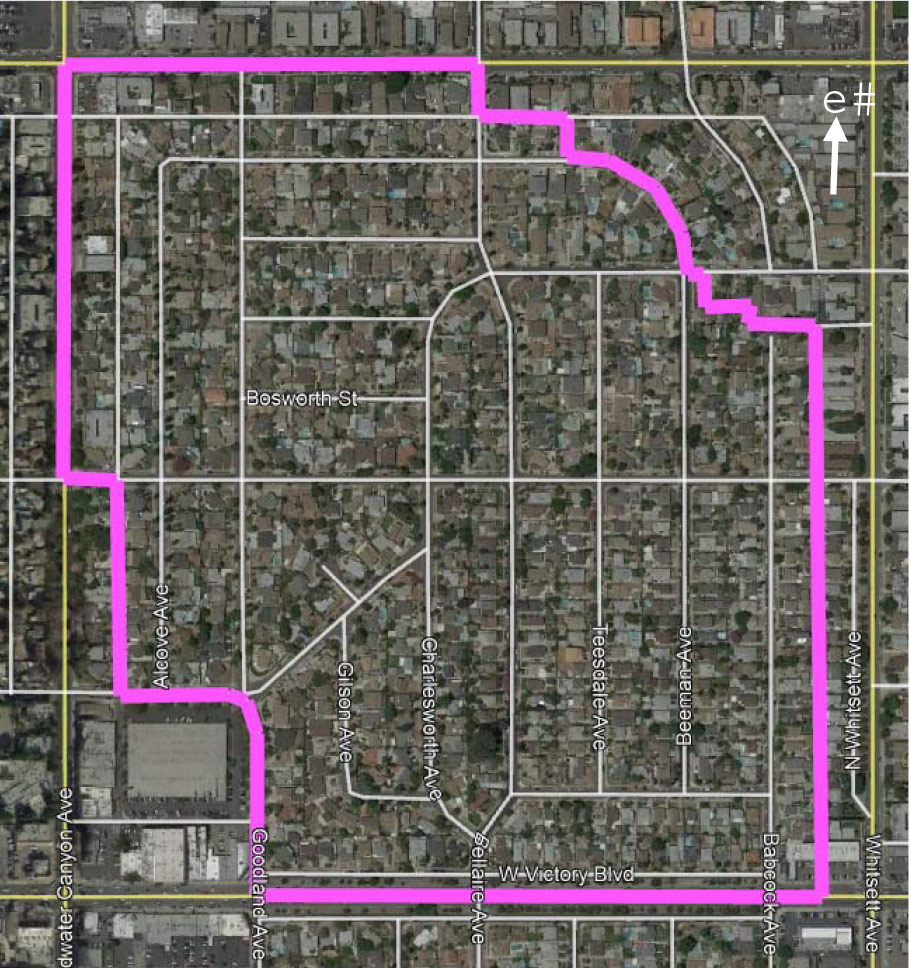 The project affects the stormwater runoff in this mapped area.