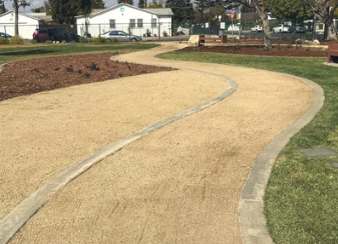 Valley Glen Community Park is leading the way on water conservation efforts after months of improvements and newly installed irrigation features, thanks to the city’s Department of Recreation and Parks.

For years, the Valley Glen Community Park has been great community asset, but it needed significant updates and improvements to fit our local mandate to cut water usage by 20 percent.

With funding resources from the Department of Water and Power’s Turf Reduction Program, the Department of Recreation and Parks was able to remove turf and re-seed the park with natural grass, and install a new irrigation system, new drought tolerant plants and landscape boulders, new street trees, new decomposed granite paving along the park’s walking paths, and new wood bark/mulch covering throughout.

This project will save an estimated 2.9 million gallons of potable water per year, which is roughly equal to the amount used by 29 single family households in the City of Los Angeles.

In addition to these upgrades, we are working on partnering with the Council Office to secure shade structures to make the park even more welcoming for our community.

Self Defense for the Soul

Self Defense for the Soul