Great Wall of Los Angeles Finally Gets Its Bridge

The Great Wall of Los Angeles in Valley Glen is a massive, half-mile long mural showing the history of ethnic people in California, from pre-historic times until the 1950s. Painted along a wall in the Tujunga Wash (a tributary of the L.A. River), the mural can be difficult to appreciate due to the chain link fence that divides it and its visitors.

The Social and Public Art Resource Center (SPARC) has plans to change that. Last week, the Arts, Parks, Health, Aging and River (APHAR) Committee approved $181,500 in Proposition A Cities Excess Funds toward construction of a pedestrian bridge on the Great Wall of Los Angeles. It is the last piece of the $1.35 million funding puzzle SPARC has put together over the past four years.

Designed by wHY Architecture and SPARC’s Judy Baca, the bridge will replace the former wooden pedestrian bridge, which crossed Tujunga Wash between Miranda and Hatteras streets on Coldwater Canyon Boulevard. Currently, visitors would have to walk all the way to Oxnard or Burbank Boulevard to get across the channel to the Los Angeles Valley College (LAVC) grounds.

Not only will the bridge open the pathway between Coldwater Canyon Boulevard and LAVC, it is also meant to be an interpretative center and viewing point for the Great Wall of Los Angeles, initially completed over fiver summers, between 1976 and 1983, and recently restored.

The old bridge was removed due to damage and deterioration | Image: wHY Architecture/SPARC

The bridge was originally supposed to be completed in 2011, but SPARC Executive Director Debra Padilla explains, “The price of steel has gone up over the years and we had to do extra fundraising for that.”

Now, with the entire $1.3 million budget secured, SPARC can start construction of their “green bridge.” As originally designed, the bridge will be solar-lit and made largely of recycled debris — such as broken glass, recycled cans, and plastic — which are commonly found in the river.

Unlike the flashier North Atwater Bridge, the Great Wall of L.A. bridge will have a more down-to-earth look.

From afar, it would look like a large grainy frame, which would increase visibility of the mural of either side of the bridge. In reality, the bridge would really be a stylized loop with a ramp that connects the from the east bank to the west bank and comes back around. Powder-coated steel guardrails would ensure the safety of visitors to the site.

Despite its simplicity, the “interpretative” part of the bridge comes when one gets on the composite plastic impregnated wood decking. The roof of the canopy will be aluminum-framed with clear glass panels. Under it, a skylight would illuminate images of the Los Angeles River and the Great Wall silk-screened on the underside of the canopy, giving visitors yet another perspective from which to appreciate the art on the river.

SPARC has been preparing for this milestone for years. Once funds are released, construction should begin in February. The bridge is scheduled to be finished after seven months.

Despite this milestone, Padilla says, SPARC isn’t done yet with the Great Wall of Los Angeles. “It’s a continuous project. Not only are we doing the bridge and restoring the Great Wall, we’re also looking at doing signage, lighting, interpretative kiosks. There are no facilities at the site, so bathrooms and benches would be great.” 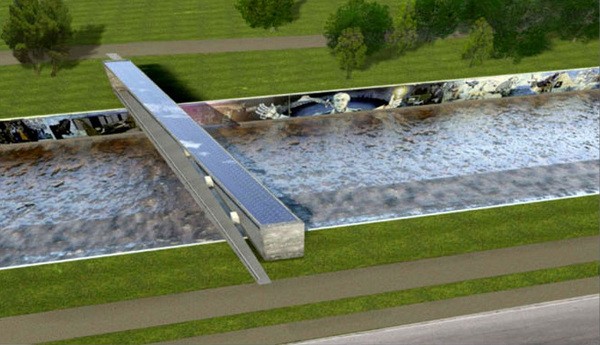 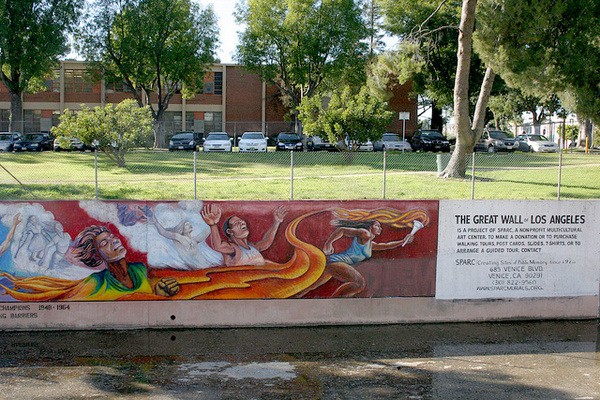