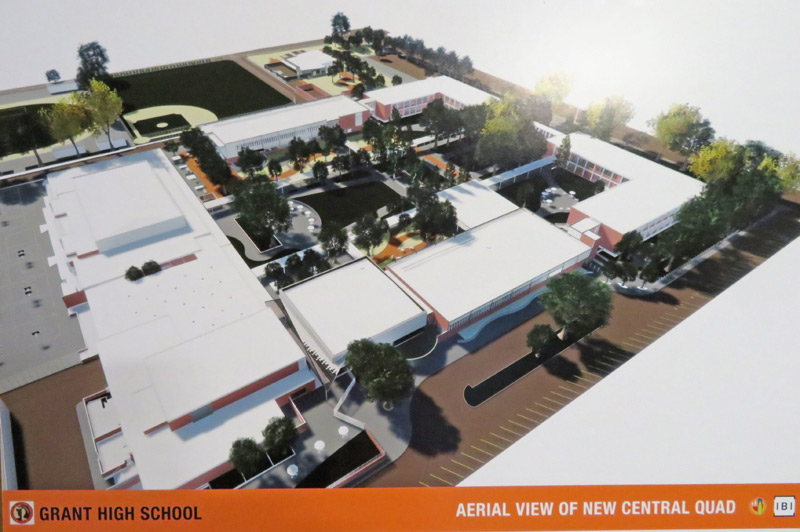 Grant High School will be the beneficiary of a tremendous facilities upgrade budgeted for $176 million over the next several years. Unfortunately, project planners neglected to consider the importance of the school’s beloved mature trees in their design and also neglected to share their plans on tree removal with the public. To begin to rectify their communication gaffe, they held a community meeting at Grant High School on Saturday, May 18, 2019. Perhaps due to the early hour and four days’ notice, the meeting was not well attended.

The meeting began with an explanation about how Grant was chosen for the upgrade. LAUSD has 560 aging facilities and has used a data driven model to select which schools to invest in. Their priorities are the seismic safety of the existing facilities and the opportunity to replace portable classrooms which are expensive to maintain. At Grant, 30% of the classrooms are portable. The state has required a seismic study of the main permanent buildings. Grant is one of the first eleven projects the district is taking on.

The plan calls for seismic upgrades to all existing buildings as well as addressing need for new roofing, air and infrastructure. The main school entrance is on Lancer Lane adjacent to the Tujunga Wash, but the entrance appears to be on Oxnard. To address this confusion, the plan calls for moving Administration to the 100 building on Oxnard and creating a secure entrance with cameras, gates, a buzzer system, and glazed bullet proof windows. That building currently includes science classrooms that are no longer adequate for current teaching methods, so the science classrooms would be relocated to one of the three new buildings. 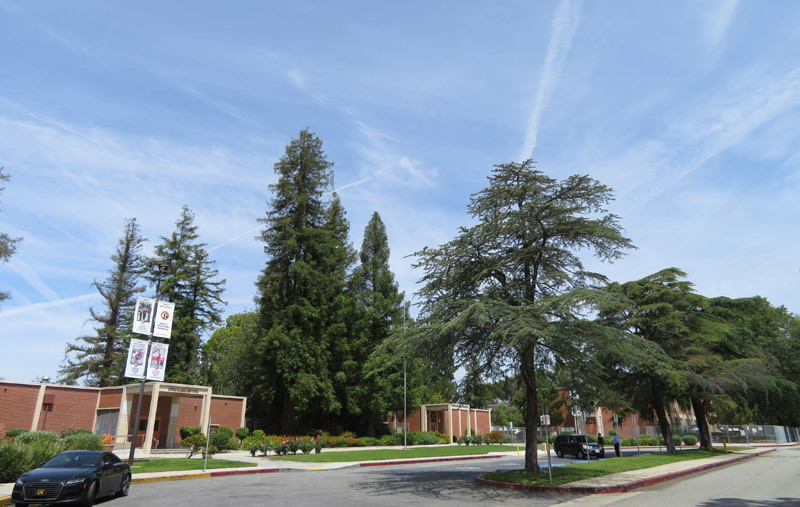 The small administration building which is surrounded by mature trees would be removed and replaced with a much larger building which would include a new library with collaboration rooms, computer lab, flexible engineering lab and career center. There would also be a robotics room to replace the shop buildings which used to teach auto repair and other hands on trades. In spite of the need for teaching the trades, the substantial salaries to be earned in the trades, and the fact that robotics is not a substitute for teaching auto repair and carpentry, LAUSD has chosen some time ago to abandon that line of education. 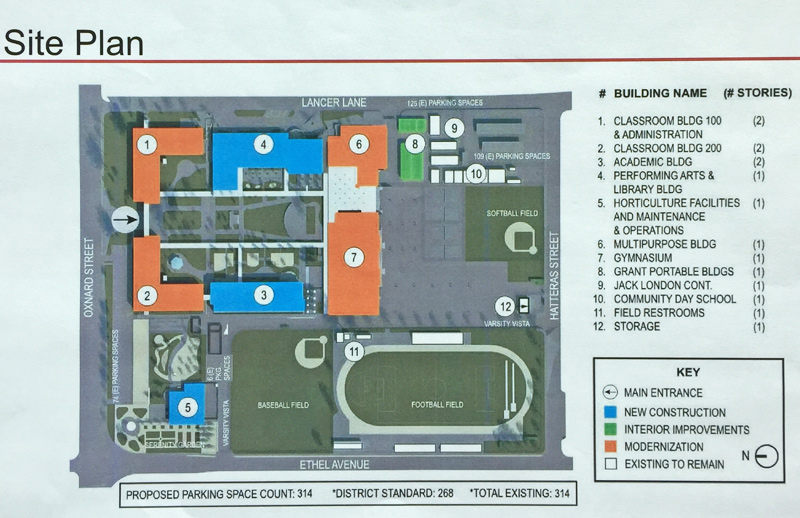 The current multi-purpose room would become the performing arts center with telescoping seats for 500, stage lighting, dressing rooms, drama room, media and film room. The portables in the northwest end of the campus would be removed and the horticulture building replaced.

Being mindful of the importance of the quad to the students and the campus aesthetics, the plan calls for keeping the quad in place. The proposed buildings were designed to complement the existing buildings and enhance the look of the campus.

The catch to this great improvement project is that it calls for removing 48 trees. Some of the trees are unhealthy and need to be removed anyway. Most are large healthy trees growing in the footprint of the planned buildings. Cy Carlberg, a consulting arborist was on hand to point out that the beloved coast redwoods surrounding the administration building are actually not native to southern California. Their southern most native growing location is Monterey, a five-hour drive to the north of campus. They prefer to grow close together with their roots supporting each other in the foggy climate of the coast. Which is to say that they could be subject to drought and die off as they have in other southern California locations. 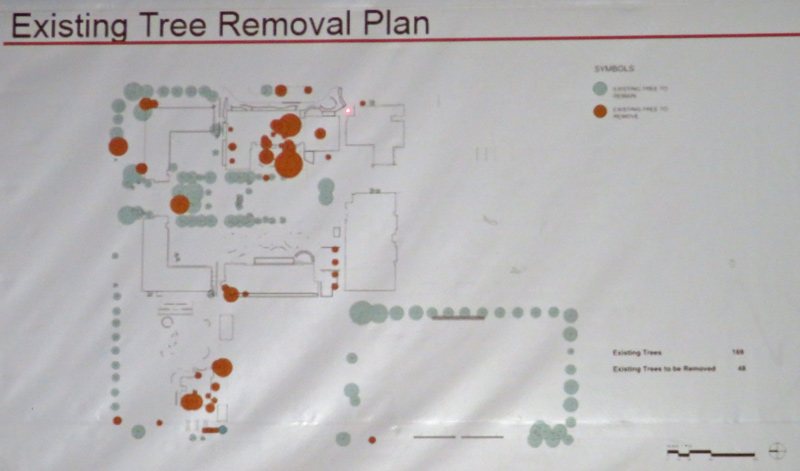 Throughout the tree discussion, unhappy constituents interrupted with comments and questions. Finally, attendees were invited to make public comment and ask questions within a two-minute limit per speaker. There were many complaints about the planned removals. One speaker wanted to know how she could protest and stop the project. Greater Valley Glen Council Secretary Mickey Jannol and Grant Alum ‘74 took the opportunity to invite attendees to the Government Relations Committee Meeting on Monday, May 20, where this topic would be discussed. The GVGC is very concerned about trees at Grant and across the city. He also asked that the project include a curb cut on Oxnard to facilitate the new main entrance and minimize impacts on traffic. He noted that the GVGC does not know who the decision maker on this project is and questioned why the design would not be planned to build around the trees.

Other public comment from residents, teachers, and parents questioned the removal of the shops, calling out the need for apprenticeships in the trades. A future student wanted to know how the new entrance would be secured. Grant teacher Liam McConville thoughtfully inquired how long the trees slated for removal would otherwise live. Another alumnus pointed out that LAUSD’s story that oops they forgot to discuss tree removal with the public belies their lack of consideration for trees from the outset. Their story would be a whole lot more palatable if they had said that they had considered the trees and deliberately designed the footprint of the buildings to accommodate key trees. The alum requested as had many others that LAUSD re-evaluate their building footprint in light of the trees with the greatest longevity.

This meeting did not address the construction logistics except to say that underground utility work would begin this summer. The project is due for completion in 2023. There will be a meeting in September to talk about construction phases timed to minimize the impact on students. The community is invited to participate in a committee in August to select the palette of trees that would be added to the campus. There are currently 169 trees; 48 are planned for removal and 107 to be added. 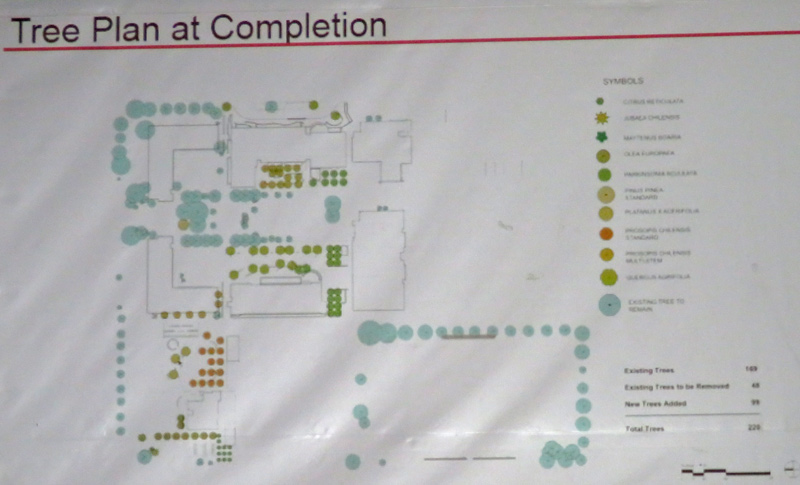 Also discussed after the meeting is that the Senior Lawn between the Administration Building and the Library was dedicated with a monument to former teacher Hal Arthur, who was slain on his way to work Friday, March 24, 1989. This too would be removed and was not mentioned during the meeting.