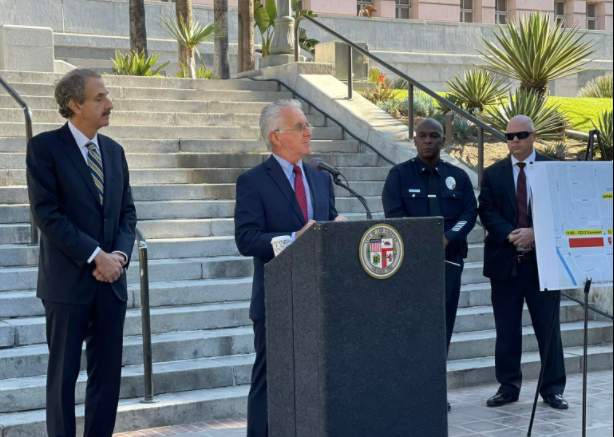 On February 24, Councilmember Paul Krekorian joined City Attorney Mike Feuer in announcing a lawsuit against the owner of a notorious North Hollywood apartment complex that has been a source of countless problems for residents and the surrounding neighborhood for years. Violent street gangs have essentially taken the complex over and it has become a magnet for violence and crime. The LAPD has recorded nine gang-related shootings at the property over the past 15 months — five since December.

The complex, which occupies an entire block from 13100 to 13212 Vanowen, is adjacent to St. Paul Assyrian Chaldean Catholic Church and 500 feet away from James Madison Middle School. Stray bullets have entered church property, and Madison parents have reported gang members attempting to recruit children on their way to and from school.

Despite repeated demands from the city, the landlord has refused to institute even the most basic security measures or repair fire-damaged units, and has failed to keep residents safe from systemic and persistent criminal violence. In addition to civil penalties, the lawsuit seeks an injunction that would require the owners to live onsite at the property until security improvements have been implemented.

“No tenant in this city should be forced to live in the kind of conditions that have existed at 13100 Vanowen,” said Councilmember Krekorian. “The residents of this complex and their neighbors deserve to live in peace and security, and today’s action lets them know we are going to fight for them.”

Other problem properties may be reported anonymously online or by calling 213-978-8340.