January 4, 2019 Update: The LA Times ran an editorial about this project and report noting that the city has not attached an economic value to its trees and is inflicting damage on trees with sidewalk repair. Read the Editorial: L.A.’s trees are more essential than ever. The city needs to start treating them that way.

The City and a standing room only crowd of 200 received a First Step Urban Forest Management Plan December 4, 2018 from a group that worked over ten months evaluating our current approach to tree management across the city and comparing it to other similar cities. GVGC Board Member Joanne D’Antonio was part of the working group of 60 people and the only Neighborhood Council representative in the group. She was on hand for the December Fourth presentation, “It was so rewarding to see this interest yesterday (at City Hall).” 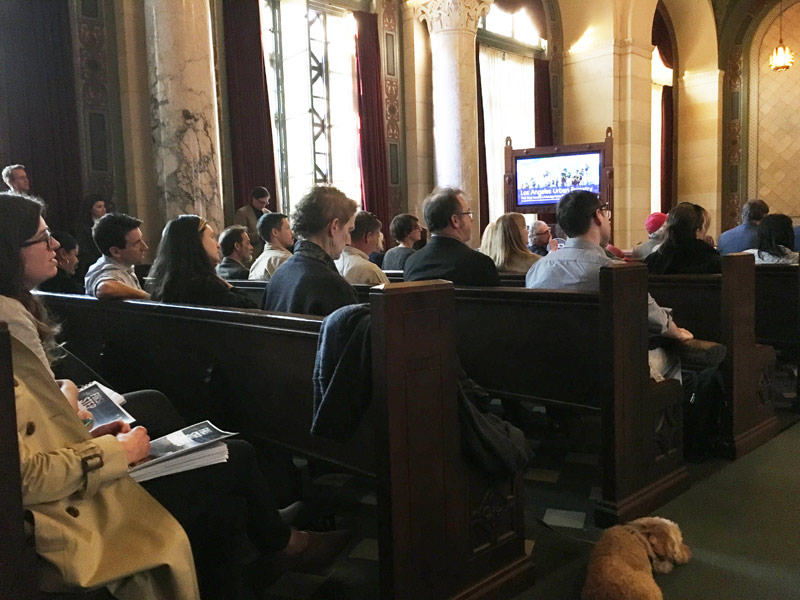 As part of the current state assessment Los Angeles was compared to New York, San Francisco and Melbourne, Australia.

Among the reasons that these cities were selected included their recognition as leading urban forestry cities and their similarities to Los Angeles in various urban forestry issues and opportunities. For example, New York City faced significant urban forestry funding challenges that resulted in unique approaches; San Francisco’s urban forestry program was drastically reduced during the recession (2007–2009) and has since made creative changes to recover; and Melbourne faces similar climatic challenges and is focused on building a resilient urban forest to counter the changing climate.

The findings showed that Los Angeles trailed other cities in funding:

On a per-capita basis, Los Angeles is ranked last, with only $6.30 per person devoted to trees. New York City is close, but the amount is misleading due to the density of New York City’s population, which is on 50% less land area than Los Angeles. Even more telling, Los Angeles’ annual per-tree budget of approximately $27 is less than half of New York City’s and Melbourne’s $60 per tree, and one-third of the $78 per tree per year that San Francisco invests in its urban forest.

The report noted that urban forests are starting to be seen as assets on city budgets. Further, shoppers are willing to spend 9-12% more on goods, more time shopping, and will travel greater distances to shop in districts with high quality trees. Of course the report called out the benefits that trees bring in cleaning air, reducing urban heat island effect, reducing need for air conditioning, improving public health and mental health.

Recommendations start with prioritizing the urban forest with a tree inventory and management plan and hiring an urban forestry coordinator.

This first effort was needed to help apply for grants to help finance the tree inventory and development of a complete Urban Forest Master Plan. It was also essential to clarifying the need for action to the City Council and Mayor and to getting all the various city entities involved in the process. It is hoped that this will inspire requests from stakeholders and Neighborhood Councils for new policies and funding to support tree preservation and prohibit developers from clear cutting land for development.

Some of the positive outcomes include that the new Director of Bureau of Street Services has begun a tree-oriented policy for sidewalk repair and saved all 18 trees on Cherokee Ave after GVGC’s D’Antonio requested he look at all the factors. These huge trees were to all be removed because the City paid out $3 million to someone who fell on New Year’s Eve. To get involved, please contact Joanne.

Planning and Land Use Committee